We joined the nation in the Queen’s Platinum Jubilee Celebrations earlier this month. Our celebrations began with a Big Jubilee Quiz on Wednesday 1st June, where residents and staff were tested on their knowledge of everything Royal! Prizes were given to all residents who took part, though it was our Manager Gill’s team who scored the most points.
On the Bank Holiday Thursday, we enjoyed watching the Trooping the Colour on our large screen TV and reminiscing memories of the Royal Family.

Friday was our Jubilee Party and our residents enjoyed putting on their best clothes and celebrating, along with staff who were wearing red, white and blue for the occasion. Our residents were delighted to be visited by the Queen herself… we took our carboard cut out around the home to visit everybody in their bedrooms so they could have their photographs taken with Her Majesty.

The rain meant that our garden party had to be held indoors, but it didn’t dampen our spirits and our conservatory was decorated with flags and Union Jack bunting.  Residents gathered for lunch – a delicious buffet followed by a choice of lemon drizzle cake, cheesecake or homemade scones. The food went down a treat along with a glass of fizz or two!
We were joined by singer John Cross in the afternoon who entertained us with a selection of songs from the 50s and 60s. Residents were up dancing with our staff and singing along to the music.

On Saturday we showed the BBCs coverage of the Queen’s coronation, which many of our residents remembered watching back in 1953. 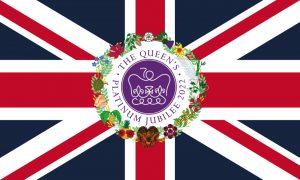